Time for an upgrade

Time for an upgrade

Well, it looks like I’m SOL when it comes to going any further in World of Warcraft. No need to purchase the latest expansion, Wrath of the Lich King, since I can’t even run around in the Burning Crusade content areas without severe lag, choppiness and massive frustration, and that’s with all settings down at their lowest. Kind of ceases to be any kind of enjoyable at that point, since one of the main reasons I enjoy the game is the graphics.

Now granted, it could be the server I’m on, and not my PC. However, I built the PC I have right now back in 2003. At the time, it was top of the line. It’s archaic now.

I’ve been wanting to upgrade, but am facing the following dilema:

I want to replace my PC with a Mac. The least expensive of which is around $800 for what I need from a Mac Mini. $800 that I just don’t have right now. Or, I could temporarily upgrade my video card, which I suspect could be a good part of my current issues. If it’s not just the video card though, I face spending over $300-400 for everything that would need to be upgraded.

Plus, I want to purchase a house.

So, my days of World of Warcraft may be numbered until I can figure out what I’m going to do. 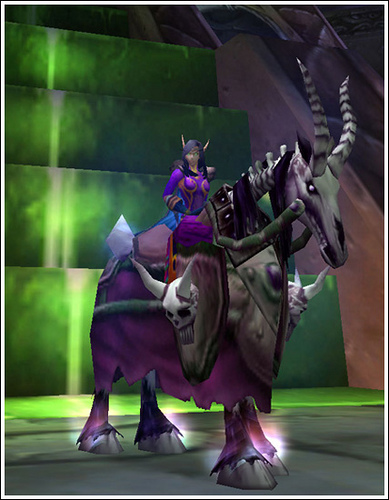 Does this make me a…

Just because I can

First impression of Wrath of…

What in the World of…